COVID UPDATE – If mutually agreeable, subject to face coverings being worn, no clinical signs of COVID, consultations will be carried out inside the building.  In order to maintain social distance we have a maximum occupancy level policy and thank you for your patience whilst waiting. We kindly request only one member of the family attends and where possible aim to get for us at the correct time for your appointment to avoid ongoing delays.

For repeat medication requests, please order at least 24 hours in advance by emailing us at medicines@ovg.co.uk or by telephoning 01458 832972. You will be requested to pay prior to collection.

Opening times during the festive period can be found here

Keep up with tips and advice from Industry Experts.

Keeping your pet(s) safe this Christmas

The John Lewis ad is out and Michael Buble is on the radio. This can mean only one thing…Christmas is coming! It is a time when most of us indulge a little, and we don’t want our pets to feel left out. Some surveys suggest that around 90% of pet owners buy their furry, feathered or scaly family members a present, and almost 20% spend more on their pets than their mother in law. Some of those presents include tasty treats, but as ever, we wanted to give everyone a quick reminder of the treats that dogs or cats shouldn’t have, as some can cause serious health problems. 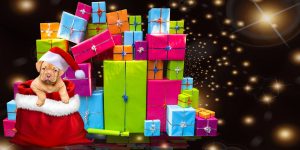 Most dog owners know by now that chocolate is a big no-no for dogs. One of the ingredients, theobromine, can cause a rapid irregular heart beat and seizures and toxicity can be (though thankfully rarely is) fatal. Theobromine is more concentrated in dark chocolate than milk, especially good quality cooking chocolate. There isn’t any in white chocolate, but the sugar and dairy content could still cause a tummy upset, so best to stick to chocolate substitute drops made specially for dogs! Don’t forget how sensitive dogs’ noses are, so if you gift chocolate to a pet owning friend remember to warn them to keep it out of reach and not under the tree!

In some cases, grapes or raisins can cause dogs to become severely unwell, even going into acute kidney failure. With Christmas cakes and puddings being baked at this time of year people often have more of these products in the kitchen than normal, and we’ve dealt with a few cases of dogs having thieved the entire stock! Luckily all have been dealt with simply as the owners have presented them as soon as they ate the raisins. Unfortunately, it’s not known exactly what makes grapes and raisins toxic, or why some dogs appear to be severely affected by only a very small amount, so we recommend keeping all mince pies, Christmas cake and Stollen well out of reach – so they don’t end up stolen! 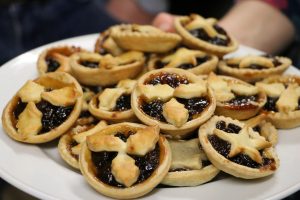 Alcohol affects dogs and cats the same way as humans, but due to their small size, much more quickly and severely, and alcohol poisoning might develop. Most pets won’t readily drink alcoholic beverages due to their unpleasant taste (remember how horrid your first glass of wine tasted?) but sweet mixers could disguise it, so make sure drinks are also kept out of reach. 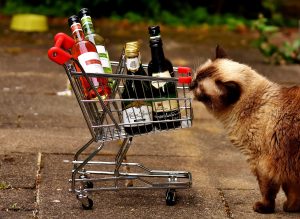 Onions and garlic aren’t highly toxic, but ingestion of very large quantities can lead to tummy upsets or destruction of red blood cells (anaemia) so they are best avoided. 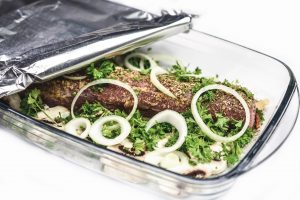 Although table scraps aren’t toxic, they can cause some problems if offered to pets. Cooked poultry bones splinter easily into sharp fragments which can damage the mouth or gut, so aren’t a suitable treat. Very high levels of fat in meals can also lead to pancreatitis for pets, which could potentially mean a lengthy hospital stay suffering with nausea and vomiting, and severe abdominal pain. A little bit of lean turkey meat is probably ok as a treat (if there are any leftovers!) but hold the skin and gravy. Oh, and just like humans, dogs eating sprouts can produce some fairly toxic gases of their own, so you have been warned. 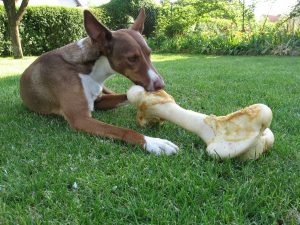 A Christmas tree in the corner of a room can be too much temptation for cats and kittens and they might try to climb it, possibly leading to injury to themselves or family members. Tinsel looks like a great fun toy too, but if eaten can cause severe gut problems as it attempts to pass through, acting as a linear foreign body and needing emergency surgery to remove. Chewing on Christmas light cables could lead to electrocution (cats, kittens and puppies and pet rabbits find them particular temptation) so best keep them unplugged and prevent unsupervised access to the tree! 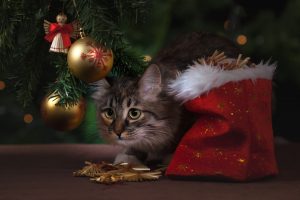 Flowers are often gifted but beware that lilies are poisonous to cats. All parts of the lily are poisonous and even a small amount of lily pollen can be enough to cause kidney failure. 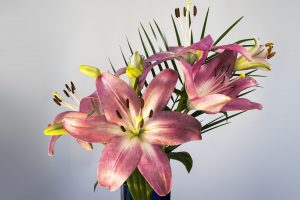 Consider moving rabbits and guinea pigs to a warmer location such as inside a shed. Insulate hutches and allow for plenty of bedding to snuggle into. Check their water twice daily in case it freezes over. 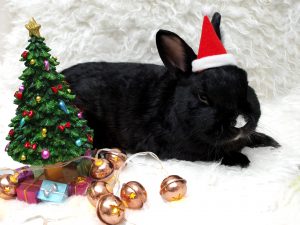 No matter how careful you are, accidents do happen. If your pet is injured or unwell over the Christmas period, we don’t advise attempting to treat them at home, since some human medications can be very dangerous to pets. Contact the surgery on 01458 832972 for advice, or information about how to contact the duty vet for an out-of-hours emergency appointment. 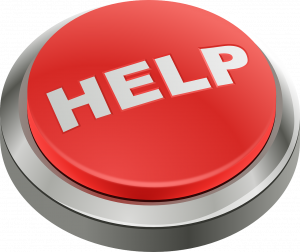